There are a lot of motorbikes in Thailand, it’s one of the most popular way to go around especially in places like Phuket where there is a lot of traffic. A lot of people who come to Phuket wonder if they can rent a bike and use it to visit. Sure you can but there are a lot of things to consider first.

Worth noting too that most of the following actually applies anywhere else in the world.

Do you have a driving license?

Do you have a helmet?

Yes, even if you see a lot of people driving without one, helmets are mandatory. The police will fine you too if you don’t have a helmet, and this is much more visible than you not having your license. Besides, your brain is at the same time the most precious and the most delicate part of your body, so just think about that. The rental shop will usually give you one, if they don’t, ask for one or change shop.

Be very careful with your insurance. Even if you have an insurance at home there are good chances it won’t cover you abroad. Also, most “travel insurances”, provided by your credit card company for example, won’t cover medical expenses due to a motorbike accident. If you want to ride a motorbike take a real insurance and read the fine prints. Be also aware that insurances won’t cover you (and your passenger) in most of the following cases:

Those two had probably everything checked on the list. And the case of this 27 years old New Zealander who discovered after a crash he was not covered by his insurance is not exceptional either.

If you are looking for a real travel insurance I recommend you check out AVI International, they offer a lot of attractive packages.

Are you used to drive a motorbike?

Better already be a good driver here, this is no place to learn. Even if you have a driving license (and European countries usually allow car drivers to drive motorbikes up to 125cc), if you never drove a bike before or the last time was years ago then I recommend you train first at home, this is most certainly a safer environment than here.

Also remember that when you drive without proper training you don’t put your life alone at risk. You also endanger your passengers’ life and the life of anyone crossing your way.

What kind of bike to choose?

Here, what we call “scooters” or “mopeds” in Europe go from 100cc up to 150cc, they are called “motorcycles”. However, remember that the limit for someone who only has a car license in Europe is 125cc, which means if you take a more powerful bike you won’t be covered by your insurance.

Then, of course, there are “Big Bikes” (and anything beyond 125cc) for which you would need special training and license in Europe. 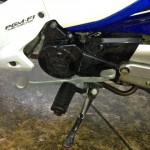 Most motorcycles have automatic gear systems (Big Bikes are all manual except for the 500cc scooters like the Yamaha T-MAX) and most rental shop will have only automatics but if you are thinking about renting a manual just think about the fact that you will wear flip-flops most of the time (and actually the lever system is a bit different from what we have in Europe).

It’s the paradise, everybody must be “sabai sabai”, no?

Not really. Driving here is a dangerous activity, just to give you an idea of the problem here is a Google search looking for motorbike accidents on one of Phuket online newspaper you will notice that most of those people died. And here is an incomplete list of Phuket expats and tourists who died between January and June 2012, 6 died in a motorbike crash, 1 in a car crash. And it’s dangerous even when you are a local, traffic statistics here are grim.

There’s no question why, Thailand has a pretty good and extensive set of traffic laws which is on par with industrialized countries. However, enforcement is lacking, to say the best, and people are reckless.

That being said, you’re in holidays so have fun and be safe.

This post is part of the second “Back to Blogging” challenge initiated by Stephanie Booth.

18 thoughts on “Riding a motorbike in Thailand”