When I was twenty something I always had a joke to crack. I though it was cool to be the funny guy so I always had something funny to say, especially during conversations I was not a part of (kind of a way to join in you see). It took me some time to realize I was obnoxious and that when people did not get my jokes, trying to explain them what just making things worse. END_OF_DOCUMENT_TOKEN_TO_BE_REPLACED

Most people attribute their misery to someone else, or circumstances, but they completely fail to realize they are the only one person responsible for it. Unfortunately it prevents them to take over and reverse the trend. END_OF_DOCUMENT_TOKEN_TO_BE_REPLACED

And when I say I am not a dog person, I mean I don’t like dogs. They are dirty, messy, needy, stupid and take too much space. Or may be I don’t like them because one attacked me when I was twelve and bit my face. END_OF_DOCUMENT_TOKEN_TO_BE_REPLACED

Last year I started to grow concerns about my privacy on Facebook. Not because of another change in Facebook privacy settings or a hack of any kind but because I started to realize that the biggest threat to my online privacy are my friends themselves. END_OF_DOCUMENT_TOKEN_TO_BE_REPLACED

END_OF_DOCUMENT_TOKEN_TO_BE_REPLACED 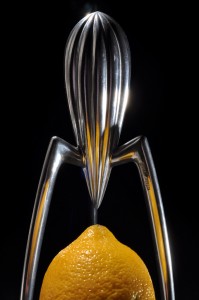 Choose Life. Choose a job. Choose a career. Choose a family. Choose a fucking big television, choose washing machines, cars, compact disc players and electrical tin openers. Choose good health, low cholesterol, and dental insurance. Choose fixed interest mortgage repayments. Choose a starter home. Choose your friends. Choose leisurewear and matching luggage. Choose a three-piece suite on hire purchase in a range of fucking fabrics. Choose DIY and wondering who the fuck you are on Sunday morning. Choose sitting on that couch watching mind-numbing, spirit-crushing game shows, stuffing fucking junk food into your mouth. Choose rotting away at the end of it all, pissing your last in a miserable home, nothing more than an embarrassment to the selfish, fucked up brats you spawned to replace yourselves. Choose your future. Choose life… But why would I want to do a thing like that? I chose not to choose life. I chose somethin’ else. And the reasons? There are no reasons. Who needs reasons when you’ve got heroin? 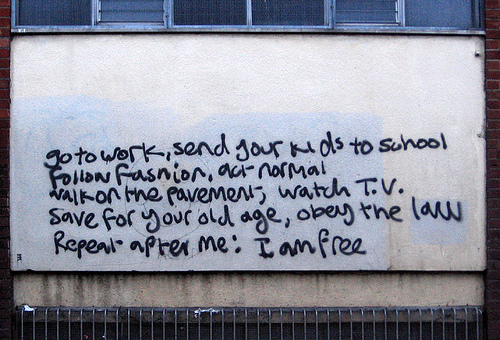 Go to work, send your kids to school, follow fashion, act normal, walk on the pavement, watch T.V., save for your old age, obey the law. Repeat after me: I am free

On a recent post about Global Languages and Social Media, Chris Brogan wonders whether his israeli friend Yuval should be blogging in English to have a better reach or in Hebrew to have a more involved local community.

Most of his colleagues and friends speak both Hebrew and English (at least!), but here’s the rub: if Yuval blogs in Hebrew, his friends and colleagues will be more engaged. If he blogs in English, he gets a potential larger audience.

Like some other commenters I would advocate for a multi-lingual approach (blog in both languages). Yuval could get an associate writer if blogging in two languages is too much work. If he cannot write in both languages, he should first blog in Hebrew (optionally writing some posts in English) and if he gains momentum eventually switch to full multi-lingualism.

However, what puzzled me most is one of the comments, from Hadassah, who wrote:

if he wants to reach readers outside of Israel, he really needs to blog in English, which I would consider the language of the web.

It reminded me about a mail exchange I had with a friend of mine about localization of his community web site, where he wrote:

I would like to educate a bit this community to talk in English, so I would prefer we do not try [to localize the web site] (translated from French)

He is French speaking, he wants to address an Asian community and he chose English. Fine, never mind the patronizing but how is the community going to react?

Despite statistics telling us that about 2 billion people are English Users in the world and that they represent about 30% of the Internet users, I don’t think that English is the language of the web.

I agree that English is a lingua franca on the Internet, like everywhere else in the world. Some people are using English to communicate with people who do not talk their own language.

I wrote some because even this is limited, Stephanie Booth has some posts and did some talks about that subject and here is what she says:

But doesn’t everybody speak English, more or less? Isn’t it the lingua franca of today that everybody speaks? It isn’t. At least not in the French-speaking part of Switzerland, and I’m certain there are many other places in Europe where the situation is similar.

The people who are reasonably comfortable with English around here will most often be those who have taken up higher academic studies, particularly in scientific subjects (”soft” and “hard” science alike).

And I am sure this is the same everywhere around the globe, even worse. I know tech savvy people who took higher academic studies, French and Chinese alike, and lots of them are not comfortable enough to communicate in English. Stephanie even created pompage.net to help French speaking web designers to get access to technical content available in English only.

Most of the people are creating content for their family, their friends or their local community. When someone is talking about French politics, odds are good he will be writing in French, for French people.

And most of those people do not care about people outside their reach. So they do not even need their content to be localized. Somehow, this the long tail.

But if you want to address a larger community would you go English only?

The problem is that today you do not really have a choice, there is no affordable tool or service that would help you localize your content in multiple languages.

You can hire professional translators or have friends do that for you. Or if you are reasonably comfortable with English you can choose to create your content in English.

Some people do the latter, but in the process they miss a large part of their potential community. And we, as potential community members, are missing an awful lot of interesting content because their producers are not reasonably comfortable with English.