And when I say I am not a dog person, I mean I don’t like dogs. They are dirty, messy, needy, stupid and take too much space. Or may be I don’t like them because one attacked me when I was twelve and bit my face.

It’s not that I am afraid of dogs but I don’t feel comfortable with dogs. Although I grew up with dogs – my parents had two dogs over the years and I am not counting the neighbors’ dogs we used to play with.

The problem is, Thailand is a Buddhist country and like India has no policy about stray animals (except to shovel their remains when one gets smashed by a car) hence there are a lot of stray dogs in the streets.

People are used to them, used to see and sometimes feed them. So the sight of a dog sleeping just in front of the door of a convenience store (and when I say “in front” I mean “in the fucking way”) doesn’t bother anyone. Anyone except me, may be, because somehow this is a potentially dangerous and filthy obstacle on my way to my weekly Magnum Almond. And I really had to stop and think about my next move.

And that really pisses me off that none of the employees of the shop is kicking that thing away. Or may be they are too busy counting the stock while sitting on the ground in the middle of the aisle (I almost tripped over the guy after entering the shop). 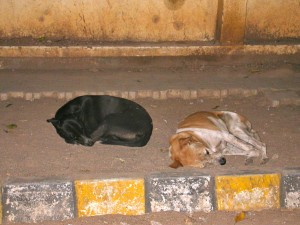 Stray dogs sleeping in the streets of Bangalore

The only time I had such an uneasy feeling was during my first night in Bangalore in 2005, I decided to go out for a stroll and there was a lot of stray dogs just sleeping there, on the walkway or in the middle of the street, unencumbered by traffic of passers-by (and I was literally in Bangalore downtown, in a 5 stars hotel). I didn’t do it twice.

This post is part of the second “Back to Blogging” challenge initiated by Stephanie Booth.