Going from Phuket airport to the most famous beaches in the island might be a painful experience if you arrive unprepared. The way transportation is dealt with on the island is peculiar at best (not to say a hold-up) and is often discussed in the island’s forums and newspapers. So I decided to put up this little resource to help newcomers avoid the traps and know what to expect after they landed.

I also added a small “how to deal with a Phuket taxi/tuktuk driver” at the end that can save you some trouble. Please, feel free to comment if you have any information to share or if you want to correct anything (especially if you are a local).

There are mainly 5 ways to go from Phuket airport to Patong, Karon or Kata, the 3 most popular destinations on the island:

My first advice is: if your hotel or resort is offering you free pick-up (or you can negotiate a free pick-up) then go for it, it will save you much hassle and money…

If you don’t have free pick-up then here are your options. I try to keep the indicated prices as accurate as I can and regularly update this post but I offer no guarantee that they are actually correct or that you will always be able to get those prices.

If you have special needs I just found today about that company, Phuket Access Travel, which specialises in accessible transports, accessible tours and accessible accommodation in Phuket and Phang Nga bay. I do not know them and never used their services but I thought they were worth mentioning. If you used them and have some feedback please leave a comment here.

Despite the name those are not really limousines. They are normal cars, owned by private companies. There’s no meter and the price is fixed in advance (forget about negotiating). There are several companies and the farther you go after the customs, the less expensive they are. Go out of the terminal and ask for a taxi at one of the booths which manages limousines and mini-van.

When you go out of the terminal the metered taxis are located on the right, just walk (ignoring the limousine drivers) and you will end up at their booth. They are supposed to use meters and allegedly are cheaper than limousines but last time I checked (last week) they were the same prices. So either the meters are rigged or they simply don’t use them.

From Mr Deen in the comments, some drivers will try to coerce you into buying overpriced tours with companies they have arrangements with. If this happens just stand your ground and don’t leave the car until you are at your hotel. You might also want to take pictures of his cab license, himself and his car plates, just in case.

Mr Deen also notes that prices will be higher at night time and that you can pre-book a ride using that website: Phuket Connect Transfers

Never go with a driver who looks like he is under influence (alcohol or whatever) and if you are a single woman then try to find a co-ride or use a mini-van.

Note: Uber is not available on the island anymore. It looks like the service didn’t last very long due to a lack of interest from the drivers.

UBER officially started on the island last month (Oct. 2014). If you don’t know UBER, it’s a taxi service that enables you to book a taxi using a mobile application (just don’t forget to download the app and create un account before you arrive at the airport).

I checked a few rides and the price seems to be about the same as the taxi drivers you can find on the island. However, they have a flat rate of ฿950 when you ride from or to the airport from anywhere on the island. It’s not interesting if you go to Patong but definitely worth considering it if you go to Rawai or Cape Panwa.

If you don’t have an account yet, use that link to create one and you will get ฿200 off your first ride. You can also use that promotion code: CKZK7

Get Uber on the Apple AppStore or Google Play.

Not sure how it’s going to operate at the airport but the Phuket governor announced yesterday (2015-07-06) that GrabTaxi is coming to the island which is overall a good news since it can be hard sometimes to get a taxi if you are not in a popular area. If you don’t know GrabTaxi yet, it’s a taxi hailing mobile application, much like Uber, except they are partnering with existing taxi drivers and companies.

They don’t say if it will include the GrabBike option, which allows you to order a motorbike-taxi, nor do they say how the local taxi will react when another taxi come to pick you up on their turf.

If you don’t have an account yet, use that link to create one and you will get ฿50 off your first ride. You can also use that promotion code: C5DC8A

Get GrabTaxi on the Apple AppStore or Google Play.

Go out of the terminal and the mini-van booths are located at the exits (same booths than for the limousines). I am a solo traveler and when I have time and I am not too tired this is my favorite option. I also think this is actually the cheapest option.

Don’t wait too long after you landed to get a mini-van, once they are full they leave and you will have to wait until the next flight. Which can take up to 1h30.

The public bus is a new service, the stop is inside the airport, just on your left when you exit the terminal. As of this writing, it doesn’t go to Karon nor Kata and is only available between 10am and sunset. For updated information you can refer to the bus company’s website but I wouldn’t trust it too much…

The Phuket Gazette reports that the bus service has been restored in full and that signs are being installed inside and outside of the terminal to indicate where the stop is located.

Getting wifi at Phuket airport

The easiest way to connect to a wifi at Phuket Airport is to use the Burger King’s wifi, there is one on the far left of the terminal, before the international departures lounge. The password is “haveityourway”. Useful if you want to use Uber or GrabTaxi and you do not have 3G.

A few advices about Phuket taxi and tuktuk drivers

First a few things to know about the drivers here:

The Phuket Gazette published a Special Report: Anatomy of a Phuket taxi driver which is an interesting read albeit mostly talking about legal taxi drivers.

So, considering all that, a few advices:

Just in case, you might want to put the phone number of the Tourist Police in your contacts, it’s 1155. There’s also a smartphone app, for iOS and Android, called “Tourist Buddy” (Apple AppStore, Google Play).

I hope this will help you have a good start in Phuket island because it’s really worth it and most people are just adorable. And again, feel free to comment if you have any information to share or if you want to correct anything.

I regularly update this post with new information. Following is the list of edits I made since I published it in August 2013.

93 thoughts on “From Phuket airport to Patong, Karon, Kata” 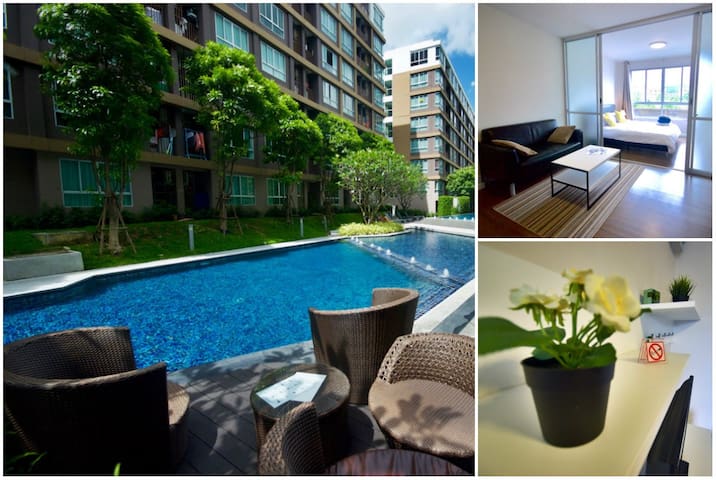 Central, 15-20mn ride from Patong Beach and Phuket Town, ideal for people who want to live in a quiet area and explore the island. Comfortable condo in a modern building, fully equipped. Access to a nice gym and a stunning 100m swimming pool. The apartment has a 50/20 Mbps VSDL connection, ideal for working holidays