One think I hate about software is when you must integrate with a poorly documented system.

To be able to code and unit test you part you have to make assumptions about the workings of this system, deploy in a real environment (which can be quite time consuming) and pray.

This is like trying to shoot a bear in the dark, if you miss it the first time it will run after you like a delivery deadline. The only thing you can do is try again until you hit or it passes you by…

If you feel any relief in sharing your dreadiest experiences feel free to comment :) 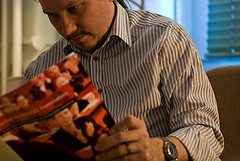 The Project Manager is a human ESB, a Human Service Bus (HSB).

The HSB receives messages from humans, transforms them, aggregates them, sometime filters them, and forwards them to other humans or HSBs.

And they do that, following the corporate processes.

Like an ESB the HSB is a nodal point in an enterprise organization and, like an ESB, they can be a source of massive system failures.