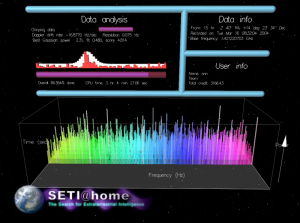 I have been participating in the SETI@Home project since January the 6th, 2000 (at this time I was a huge fan of The X-Files and I though it may help Fox Mulder find his lost sister…). Since then I have been installing the SETI@Home client on every desktop or laptop computer I have been using.

For those who do not know what the SETI@Home project is, the goal is to sort out radio signals from the Arecibo radio telescope using grid computing in order to find extraterrestrial signals.

As far as I know this was the very first large scale implementation of a grid based computer and today, with 556,888 machines and 1,393.74 TeraFLOPS per day, I think this can be considered the most powerful super-computer in the world.

We still did not find any track of Samantha Mulder, but what this project has actually proven is that it is possible to use desktop computers idle time to do useful scientific researches.

In 2005, the SETI@Home software became BOINC (Berkeley Open Infrastructure for Network Computing) and mutated into a platform which is now not only supporting the SETI@Home project but many other scientific projects.

When I am not using them, my laptop and my desktop are running the following projects:

What are you doing with your computers’ idle time? If you have BOINC installed, list the projects you are supporting in the comments, if not then install it and become part of the most powerful super-computer in the Solar System ;)

3 thoughts on “What BOINC are you?”